Posted at 11:40h in Blog, Featured, news by Victory 0 Comments 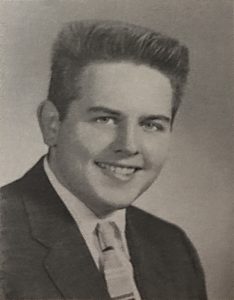 The Class of ’55, Mt. Victory-Dudley School, is launching a fundraiser in memory of classmate Bill Martin (1937-2019), son of the late Henry and Mabel Martin, lifetime residents and owners of Martin’s Supermarket in Mount Victory.

The Bill Martin Memorial Fund monies are earmarked for the Henry Martin Park Landscape and Mural Project in coordination with the Mt. Victory Community Improvement Association. The upgrades include new landscaping and a new mural for Henry Martin Park located at the northeast corner of Main & Taylor Street in Mt. Victory, Ohio.

Request are being made for donations and any amount is appreciated!

DONATIONS CAN BE MADE BY USING THE FORM BELOW –

Thank you to Ridgemont students helped design and decide the low maintenance landscaping as part of their curriculum for school year 2019-2020.  Their new design will enhance the park and take into consideration long term maintenance by volunteers. 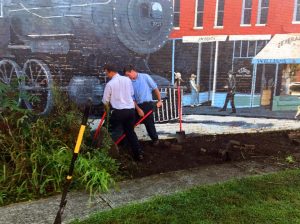 A new mural will replace the existing mural and will reflect key scenes, places, and events in the town’s history. The community will be involved in selecting the history photos depicted in the new mural.

The Henry Martin Park was developed by the MVCIC after Martin’s Supermarket building burned to the ground in 1993. The group bought the vacant lot and with the help of many generous people developed the park, naming it in honor of the supermarket’s founder, Henry Martin. The finished park was deeded to the Village of Mt. Victory by the MVCIC. A mural depicting the town’s history was painted onto the building adjacent as backdrop to the park.

The current mural was painted in 1998 by local artist Jim Daly on the soft brick that can be a challenge to maintain. It has been rescued several times and after much research, it was decided it would be best to replace it with a fresh new look and innovative processes that will help provide longevity. All people who donated to the park’s current mural are listed in the 1998 mural donor book. The same will be done for the new mural’s project to give thanks to a new list of donors and people who will make this possible.

Work has already started to remove the old landscaping and upgrades will begin asap! – Please donate to the Bill Martin Memorial Fund to fund the upgrades needed to Henry Martin Memorial Park that has become a focal point of the village and photo op for so many!

Sorry, the comment form is closed at this time.